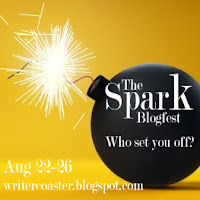 I’ve mentioned this before, but in terms of inspiration–or “spark”–I find a lot of mine in music.

For as long as I can remember, I’ve linked songs to story. Maybe it’s because my favorite songs as a child told a story; I especially liked “Chanson Pour Les Petits Enfants” and “Band on the Run” and “The Gambler.” So somewhere in the back of my mind, every song became a story (and I guess in a way they all are), and I just began to fill in the missing bits.

When I got to that age where one begins to make mix tapes (CDs and playlists now, I suppose), I would pick a character or TV show or movie and put together songs that I felt were connected to them in some way. My cassettes were stories of a sort, and my friends would come to me, bewildered, and say, “I never would have thought . . . But I absolutely see now how these things fit.”

Sometimes it’s hard for me to remember not everyone sees and hears things the way I do. Being a writer means living somewhere in your head, and the words are the open door when you invite someone in.

I was working on a major motion picture at one point, and they let me help put together the soundtrack. And while the movie itself was only so-so–it was never big at the box office and only rarely ends up on a movie channel late at night–the soundtrack became a bestseller. Too bad as a lowly PA I didn’t receive any credit! But I can look at the track list and know I was the one to suggest the Rolling Stones.

So yes, sometimes when a song comes on the radio and I start to really listen–because for me lyrics are just as important as beat or rhythm or melody–something will spring to mind. The song sparks my imagination, and I find I must go play with whatever idea has been ignited.

So my post earlier today was about the two big projects I’m currently working on. In keeping with Sparkfest, then, I’ll talk about what, well, sparked them.

The play came from a drive. Quite simply, I went over a bridge. I was thinking at the time that I needed an idea for this play, and I might’ve seen something about the lottery out of the corner of my eye? Somewhere in there, the first line of the play sprang to mind: “The day Lucky jumped off the bridge was the day he won the Lotto.”

The “K-Pro” story was something that simmered for a lot longer. I have a tendency to lie in bed and think a lot. Daydream, make up stories, whatever. But this story is an odd blend of personal experience–that is, time I’ve spent on film sets and with actors (one of the main characters is an actor), time spent abroad, and my own history. They do say write what you know. I’d probably add: but make it more interesting. 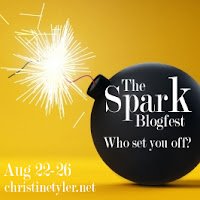 What book made you realize you were doomed to be a writer?
I’ve been writing for as long as I can remember and making up stories for longer than that. So I can’t really say which book did it for or to me. In fact, since I wanted mostly to be a screenwriter, it’s far more likely a movie or television show is the culprit.

What author set off that spark of inspiration for your current Work in Progress?
Right now I’m writing a stage play, and I’d say there’s a bit of Tennessee Williams in it, though I’m picturing a young Ewan McGregor as my lead, and I’d say that more than Williams is inspiring a lot of my choices.

I’m also working on a novella, and again I have an actor in mind as my main male character while drawing the female protagonist from personal experience.

Or, Is there a book or author that changed your world view?
Oooh. Neil Gaiman maybe? It’s funny because I read Dean Koontz and Stephen King for years and years–used to steal my daddy’s paperbacks–and they were very dark and strange and gave me a lot to think about (Twilight Eyes, Lightning, and The Dark Half pop into my mind here). BUT . . . It wasn’t until I started reading Gaiman that I sort of learned how to look at things a bit differently.

Anne Rice is having an interesting sort of discussion with her Facebook followers about how the Internet world enables obsessive negative “fans” to launch sustained attacks against authors they dislike. Rice asks the question, “Why bother?”

Authors deal with a lot of criticism; it’s part of the package when putting your work out there. In a way, criticism is good. For one thing, an open-minded author might learn a thing or two, or at least have something to think about when reading reviews of his or her work–whether the reviews be good or scathing. And of course you’ve heard that there’s no such thing as bad publicity. People criticizing your work means someone is reading your work. Always a good thing. And even hurtful reviews might garner interest, so that other people are tempted to read your work themselves and form their own opinions.

Okay, but then there are these singular individuals (though the bigger the author, the more of these there seem to be) who make it a sort of mission to berate an author’s work. These are the negative fans Rice talks about. These are the people who send letters and e-mails to the author detailing everything that’s wrong with every book–even if the fan hasn’t read them. Not one letter but dozens or even hundreds. The fan might also write about the author’s personal life, might take the author to task for any number of his or her life choices and so on. This person starts websites that are designed to slam the author, they go on chat boards and leave nasty comments, or they write long-winded Amazon.com reviews about how awful the books and the author are.

“Why bother?” Rice asks, and there are as many reasons why a person might do this as there are people who do do it. Some people simply can’t stand to see something they disagree with succeed; they have a sort of allergic reaction to what becomes popular and mainstream. They feel a need to show they are different, somehow more selective (elite) than the average person. Some of them–I’m sure in Rice’s case–have “religious” reasons for antagonizing a writer whose books they feel are somehow agents of evil. Some of them like the idea that they have a platform and are getting attention. It gratifies something inside them.

I studied fan psychology as part of my screenwriting degree (that probably seems strange, but there’s actually only so much screenwriting one can do in college, so I had to have an additional focus). As a fan myself, I found it interesting on a variety of levels. And certainly, as Rice posits, the Internet has made it all that much easier to latch on to something, whether it be pro or con. It’s easy to start a site or a blog, easy to search and find others who like or dislike something or someone, easy to form or join groups, etc. But the flip side is that there’s that much more for authors to sift through, too, and what’s funny is how these negative fans start to feel like they’ve made a connection when, realistically, the author they are hounding may or may not have noticed at all. Or even if she’s noticed, it’s just as easy to discount the ravings of one person online in the clamor of all the other “voices.” So while the Internet works for the negative fan, it also works against him.

I should know, since I spent a year writing letters to Rob Thomas and Matchbox Twenty on my old site Letters to Rob. I did it as a lark, mind you, not because I really had any particular beef to pick with any of them. In fact, I very much like their music (as unpopular as that makes me with my friends). It’s strange because you have to really like something or someone–or want to like them–to be able to feel betrayed by them. So negative fans must have had some expectation that was not met, some disappointment, in order to generate the kind of hostility involved. Though sometimes the perceived betrayal is that a friend, or many friends, or the whole world likes something that the negative fan cannot embrace, and so that person lashes out in frustration. The fan feels misunderstood and wants to enumerate the reasons he or she cannot be brought into the fold, the circle of fandom, that everyone else seems to inhabit.

I didn’t read Harry Potter for a long time, even though everyone else was insisting it was wonderful, I must read it, etc. And of course the more people told me I had to, the less I wanted to. But I didn’t start writing letters to J.K. Rowling about how she was ruining the world with her stupid wizard books. (I’m sure someone did, but it wasn’t me.) The negative fan that takes that extra step–some kind of switch flips inside them and they feel that need to go after whatever or whoever is irking them. Whether it’s that “God told them to” or they just hate that something or someone is more successful than they are–these fans are the people who often say they “could have written something better”–who knows? I would tell them not to waste such energy in fighting someone who has no interest in fighting them. I would tell them that if they really could write something better, do it. Why not try to be successful in your own right instead of detracting from someone else’s shine.

But as ever, it’s easier to ride the coattails of someone else’s hard work. These negative fans are still riding the author’s train, even if they are sitting in the very back.